We are excited about a guest post today by Carrie Kilareski from Virginia. This will be Carrie’s 3rd year running with Team Sadie and 2nd for her kids Matthew & Sarah in the fun run. Sarah’s story is so inspirational, we have been excited to share it with you. Our Sadie was almost named Sarah as her “formal” name and Sarah & Sadie share Elizabeth as a middle name. Born only two months before Sadie, Sarah also has blonde hair and blue eyes – I’m sure we’d hardly be able to tell them apart!  We hope you are inspired by Sarah in your running and fundraising; feel free to share Sarah’s story with your friends and family. 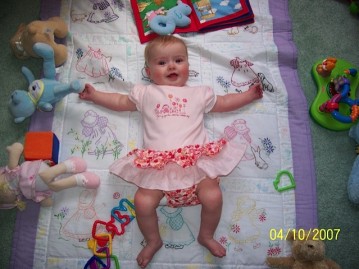 She was a healthy baby. She spit up a lot but since she was gaining weight her doctor wasn’t concerned. At her one year well baby check up, she had gone from 60% on the weight growth chart at her 6 month well baby check up to 0%. Something wasn’t right. Even though we were feeding her, her body wasn’t absorbing the food properly. She was labeled failure to thrive. For three months, doctors put her through every test and procedure they could think of, all the while she continued to lost weight.

Finally on January 2, 2008, she was given a swallow test that showed she aspirated liquids. We were told to thicken all liquids. It was a learning process. A simple cup of water was dangerous for her. Ice cream and fruit (all fruit is juicy except bananas) would choke her. By 18 months, her weight improved to where it should be on the growth chart.

We were told she had severe reflux, possibly delay of stomach emptying and chronic aspiration. But, no one knew why. One specialist told us her aspiration was a developmental delay and she’d grow out of it.

Finally after too many tears and frustrations with doctors not knowing how to incorporate Sarah’s aspiration into her medical care (many doctors told us they’d never heard of a child having it), especially when she would get so sick, we made the tough decision to switch insurances and medical care, even if it meant driving to Maryland. 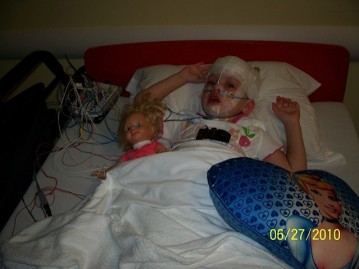 It was at Johns Hopkins Children’s Center (JHCC) that progress was finally made. Doctors there worked together as a team. The difference was night and day.

In September 2009, they found that Sarah had a laryngeal cleft, which is a hole in the wall that separates the esophagus from the trachea. Another surgery was done to repair the laryngeal cleft, followed by a stay in the PICU and regular inpatient rooms.

She had a rough recovery that fall, with recurring fevers. The doctors never gave up. They cared and were concerned. More tests and procedures followed.

2010 was a year of tests and procedures. Her chest pain increased. Her medical team kept trying to figure out what was causing her pain. Tests and procedures would show different things that weren’t right but no clear source of the pain. The one good result that came in 2010 was that Sarah passed her swallow test for the first time. The laryngeal cleft repair worked. For the first time she could eat ice cream and enjoy regular, unthickened water!

2011 was a year of surgeries and hospital stays as her pain became so debilitating that she only had about 1-2 hours of play in her a day. Each surgery surprised the doctors, as they would find things they weren’t expecting to find: malrotated intestines (a rare form that was undetected during her numerous tests), bile in the stomach, and mesenteric lymphadenitis. It was a rough year, but our Lord guided the doctors and us every step of the way. Sarah’s doctors said they weren’t satisfied that Sarah’s pain lessened, she should be in no pain. They worked together so closely and they never gave up. 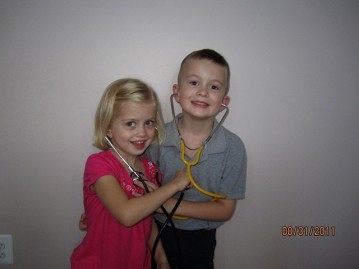 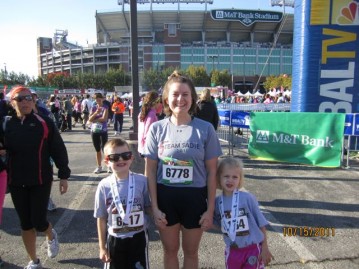 By September 2011, Sarah was pain free for the first time in her life. It is now August 2012, and she continues to be pain free. She has now gone over a year without any surgeries. This is the longest she’s ever gone without surgeries. In the first 5 years of her life, she had 9 surgeries for one rare thing after another. She used to live in constant pain, always wanting to be held. It was the most helpless feeling to watch your child live in pain and not be able to help them. Now, she is full of joy and always smiling and hopping. I savor and appreciate her smiles and energy so much because for so long it wasn’t there.

We believe our Lord healed her and guided the doctors every step of the way. I am passionate about good medical care, training and research, especially for children. Without it my daughter would not be alive. The average doctor did not know how to help. Now looking back, every doctor says she is a miracle.

A couple articles written by Hopkins on Sarah:

When Reflux Is More Than Reflux